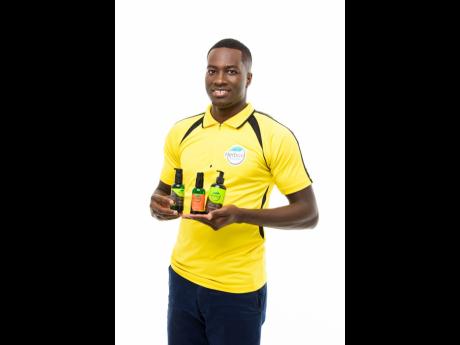 EIGHT YEARS ago, if anyone had asked Javin Williams what he would be doing with his life in 2020, his answer would have been immediate and unequivocal: he would be pursuing a career in the field of information technology, just like his two older brothers.

If anyone had suggested that he would instead be the managing director of Herboo Corporation Limited, a personal care and cosmetics company that he co-founded, he probably would have laughed and continued walking to one of his computer science classes at Northern Caribbean University (NCU). However, that’s exactly where he has ended up, and if you ask him, he’s right where he’s supposed to be.

Williams’ entrepreneurial spirit was activated when, like many others who wade into the waters of business ownership, he devised a solution to a problem he had and thought it could work for others as well. His problem was dandruff, and the top brands like Head & Shoulders and Selsun Blue were not working satisfactorily. He turned to his grandmother, who knows a lot about herbs, and asked her which plants he could use to remedy the situation. “She recommended rosemary and peppermint, and when I used those herbs, they helped me with my dandruff. I thought, why do we have so many of these synthetic brands when we can actually produce a natural product here in Jamaica with local ingredients?” he explained.

The opportunity to turn his thought into what eventually became Herboo (a portmanteau of herbal and shampoo) came when NCU announced a business plan competition in 2012, where the winning team would receive $1 million to go towards setting up the business and to help with tuition. The team – consisting of Williams, his sister Kamla, and classmate Kimiesha Maxwell – didn’t win the competition, despite much positive feedback, but the idea to make their herbal shampoo a reality firmly took root. “I found that I loved selling. I liked to convince people and show them a better option from what they were used to. Learning about business really excited me,” he said.

Maxwell only remained involved for a short while and Kamla, who already had a degree in social work, needed some convincing. “Her plan was to help out one or two times, and that turned into eight years,” he laughed.

Determined to protect their business idea, Williams copyrighted the formula for their flagship product, a two-in-one shampoo and conditioner, by registered mail the day after the competition and jumped right into a training course offered by NCU’s Morris Entrepreneurship Centre to bolster his knowledge base. While completing the course, he learnt about the First Heritage Co-operative Credit Union Business Plan Competition, and Herboo was ready to go again. This time, they were up against teams from NCU, The University of the West Indies, and the University of Technology, Jamaica. To their delight, Herboo claimed the top prize of $300,000. Even better, some of the judges were so wowed that they bought the product during the presentation.

“We used that money to fix the labelling because, at the time, we were using regular printing paper and alcohol bottles that we recycled. We were now able to purchase proper bottles and crack-and-peel paper, and we also bought a laser printer because we wanted to scale up the operations and print our own labels,” said Williams, adding that that move was a mistake and they should have worked on standardising the formula first. “Sometimes the batch would come out green, sometimes it came out yellow, sometimes brown. Customers were like, ‘What’s happening here, Javin? This isn’t consistent at all.’ There were stores that were interested in the product, but every time we delivered a batch to them it would look different. You know how when you’re cooking you use a pinch of salt and a pinch of pepper and you don’t even know the exact amount? That was the case.”

They corrected that problem by working with the Scientific Research Council and the Ministry of Health just in time to enter another contest, the National Business Model Competition. Again, they faced off against students from the three major universities and came out victorious, putting the prize money right back into the business. This competition had an international component, so a few months later, they were in Utah in the United States to represent Jamaica against American university teams. Herboo placed eighth and was awarded the best international team. “That was pretty solid for us,” said Williams. “When we got there, we realised it wasn’t about the competition, it was about the knowledge that you gained because they had some serious business lessons to teach us.” They participated in several courses and field trips to top companies in the state, where they liaised with seasoned entrepreneurs.

In early 2018, the Development Bank of Jamaica sponsored an investment readiness workshop organised by consulting and advisory firm BizTactics Limited, which is helmed by Sandra Glasgow, a co-founder and manager of FirstAngelsJA (FAJ), Jamaica’s first angel investor network. Herboo found itself among the 20 small businesses vying for a spot in FAJ’s upcoming pitching sessions. “There were a lot of things I didn’t know about angel investing. I had the misconception that these guys were trying to take away your company to maximise on their investments. Sandra demystified a lot of those myths,” he said.

Herboo was selected for four hours of coaching to get ready for the pitch, and Javin had only four days to get his pitch right before facing the Angels. “Day one, I went into the coaching session thinking I had this locked. I went in and there was no small talk, no ‘Hi Javin, how you doing? How was your night? How was your drive up from Mandeville? None of that,” he recalled with a laugh. “As we started the session, Sandra said, ‘Hi. Let me hear your pitch.’ I was so nervous, I started getting all flustered.”

Williams went back to the drawing board a few times to fine-tune Herboo’s pitch, even working into the nights while sleeping in the car they were using as a company vehicle because he didn’t have anywhere to stay in Kingston and didn’t want to risk being late for any of his sessions. “It was all passion for me. I didn’t want to give a bad impression, I just wanted everything to go right,” he said.

In his final practice run, Williams decided to be bold and asked Sandra at the end if she would invest. “I looked right into her eyes and she said ‘yes’ without blinking. That gave me confidence that I really had something great here and it could actually work,” he shared. On the day, I did my presentation and hit every nail on the head. I was so nervous, but one of the Angels stood up and clapped.”

Going forward, Williams is very specific about his vision for the company: “In the next five years, Herboo is going to become a household name in Jamaica, just like you know the brands Revlon and TRESemmé,” he said.